RUN DMC adidas: a collab the world  had never seen before

RUN DMC adidas is one of the better parts of all sneakers history. Fact is that hip-hop and sneakers go hand in hand like peanut butter and jelly. Some of today’s most coveted sneaker releases are collaborations with today’s biggest hip-hop stars (see any Travis Scott collab). But this hip-hop x sneaker partnership stems way before any Travis Scott collab was even thought of.

As a matter of fact, we’re willing to bet large amounts of money that the biggest hip-hop x sneaker partnership originated way before most of you were even born. In our humble opinion, there is no stronger bond between a sneaker brand and a hip-hop artist than the one that adidas has with the legendary hip-hop group, Run-D.M.C.

RUN DMC: From Queens to the World

For those of you that may not know, Run-D.M.C. was a hip-hop group that came out of Hollis, Queens, New York way back in 1983. The group included Joseph Simmons, Darryl McDaniels and Jason Mizell. When all was said and done, not only was Run-D.M.C. considered one of the most influential groups in hip-hop culture, but they were also one of the most famous hip-hop groups of the 1980s.

In 1986, Run-D.M.C. came out with a single titled “My adidas” from their third Raising Hell. Keep in mind, this “My adidas” single came out way before any Run-D.M.C. x adidas was even thought of. The “My adidas” single was about the hip-hop group’s love for adidas sneakers. Run-D.M.C. member Darryl McDaniels stated: “It was a song that was about our sneakers, but it was bigger than just talking about how many pairs of sneakers we had,” DMC told MTV News.

“It came from the place of people would look at the b-boys, the b-girls and go, ‘Oh, those are the people that cause all the problems here.’ And, ‘Those young people are nothing but troublemakers and those young people don’t know nothing.’ So they was judging the book by its cover, without seeing what was inside of it.” 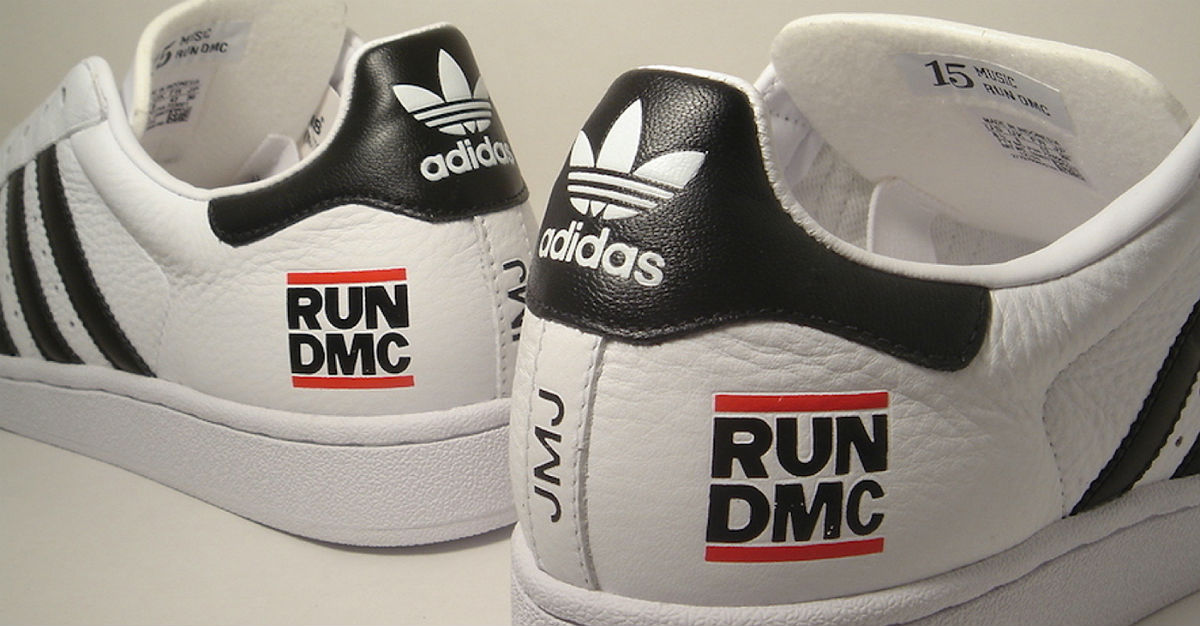 In other words, Run-D.M.C. wanted to prove to the world that you can’t judge someone based on what they wear, especially sneakers. Just because you associate adidas sneakers with “troublemakers” does not mean that everyone who wears adidas sneakers causes problems.

Run-D.M.C. was a successful hip-hop group way before this “My adidas” single came out. They toured all over the world all while wearing their adidas sneakers. The “My adidas” single was not a song about bragging or showing off. Instead, the single was released to prove to you that you can be successful while wearing whatever you like. It showed you not to be judgmental.

My adidas RUN DMC My adidas: way more than just a song

Shortly after the “My adidas” single came out, adidas noticed that their sales began to go up, but they didn’t know why. They began doing their research and found out that one of the main reasons their sales began to skyrocket was because of Run-D.M.C. and their love for adidas footwear. Run-D.M.C. were considered influencers way before that was a job title on IG bios (ha!), so it’s no surprise that lots of Run-D.M.C. fans were also rocking with the Three Stripes, hence the sales charts going through the roof.

Back in July of 1986 Run-D.M.C. was performing in New York at the Madison Square Garden. adidas reps were in attendance scouting the hip-hop group. During the show, Run shouts out: “D, take it off your feet; hold it up. What’s those? Everybody in here, if you got adidas on, hold ‘em up.”

Almost every single fan in attendance took off their adidas shoes and put them in the air. adidas was in total shock in what they were witnessing. They decided to do something that was completely unheard of back then (for a hip=hop group), they signed Run-D.M.C. to a $1 million dollar endorsement deal.

As expected, the $1 million dollar endorsement deal paid off as adidas Superstar sales ended up hitting close to half a million pairs that very same year. Soon thereafter adidas came out with an entire Run-DMC line that included your basic tees as well as leather tracksuits with a hefty price tag.

A couple years later adidas even released special Run-D.M.C. shoes known as the Eldorado, Fleetwood and Brougham (named after the group’s favorite cars) and even came with a special version of the Superstar known as the adidas Ultrastar. adidas even did sponsored tours with Run-D.M.C.!

The partnership between Run-D.M.C. and adidas broke boundaries and managed to cement a legacy. The best part about it is that no one really saw it coming. The bond between the two parties represented an era in which both brands managed to distance themselves from the stereotypes given to them. The German brand (adidas) was always portrayed as being too conservative, while the notorious hip-hop group demonstrated how much of an influence they could have on the youth culture without affiliating themselves with drugs or gang culture.

This partnership opened the eyes of sportswear brands all across the globe. They realized that they didn’t have to limit themselves to the sports world/audience. As long as you market your product the right way and have people with strong influence back it up, a world beyond sports was up for grabs. They realized that there was strength in numbers and that well-thought-out collaborations could strongly benefit all parties involved.

Music and sports brought together by creativity

The possibilities were/are endless. As successful as these footwear endorsements are with big time artists such as Travis Scott, Beyoncé and Rihanna, none of them would have been possible had it not been for what Run-D.M.C. was able to accomplish with adidas.

We’re now nearing close to 35 years since the first partnership between Run-D.M.C. and adidas took place. Even after all these years, the Run-D.M.C. x adidas legacy lives on and remains strong. As a matter fact, with the adidas Superstar celebrating its 50th anniversary this year, there’s already rumors going around saying that a Run-DMC x adidas Superstar 50 Collection is in the works. Talk about leaving a lasting impression.